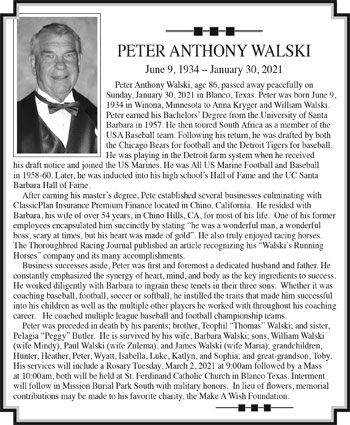 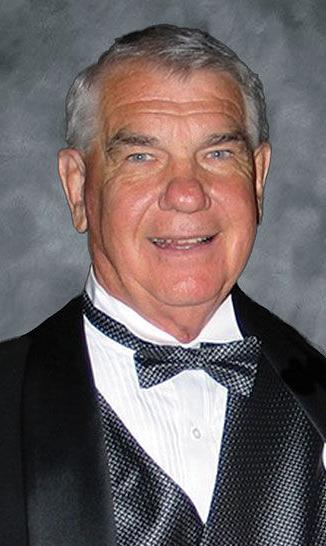 Peter Anthony Walski, age 86, passed away peacefully on Sunday, January 30, 2021 in Blanco, Texas. Peter was born June 9, 1934 in Winona, Minnesota to Anna Kryger and William Walski. Peter earned his Bachelors’ Degree from the University of Santa Barbara in 1957. He then toured South Africa as a member of the USA Baseball team. Following his return, he was drafted by both the Chicago Bears for football and the Detroit Tigers for baseball. He was playing in the Detroit farm system when he received his draft notice and joined the US Marines. He was All US Marine Football and Baseball in 1958-60. Later, he was inducted into his high school’s Hall of Fame and the UC Santa Barbara Hall of Fame.

After earning his master’s degree, Pete established several businesses culminating with ClassicPlan Insurance Premium Finance located in Chino, California.  He resided with Barbara, his wife of over 54 years, in Chino Hills, CA, for most of his life.  One of his former employees encapsulated him succinctly by stating “he was a wonderful man, a wonderful boss, scary at times, but his heart was made of gold”. He also truly enjoyed racing horses.The Thoroughbred Racing Journal published an article recognizing his “Walski’s Running Horses” company and its many accomplishments.

Business successes aside, Peter was first and foremost a dedicated husband and father. He constantly emphasized the synergy of heart, mind, and body as the key ingredients to success. He worked diligently with Barbara to ingrain these tenets in their three sons.  Whether it was coaching baseball, football, soccer or softball, he instilled the traits that made him successful into his children as well as the multiple other players he worked with throughout his coaching career.   He coached multiple league baseball and football championship teams.

Peter was preceded in death by his parents; brother, Teophil “Thomas” Walski; and sister, Pelagia “Peggy” Butler.  He is survived by his wife, Barbara Walski; sons, William Walski (wife Mindy), Paul Walski (wife Zulema), and James Walski (wife Maria); grandchildren, Hunter, Heather, Peter, Wyatt, Isabella, Luke, Katlyn, and Sophia; and great-grandson, Toby. His services will include a Rosary Tuesday, March 2, 2021 at 9:00am followed by a Mass at 10:00am, both will be held at St. Ferdinand Catholic Church in Blanco Texas. Interment will follow in Mission Burial Park South with military honors.  In lieu of flowers, memorial contributions may be made to his favorite charity, the Make A Wish Foundation.