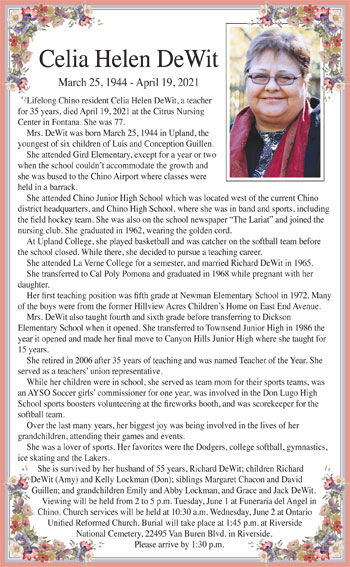 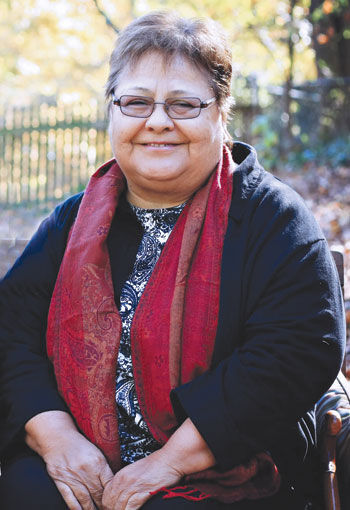 Lifelong Chino resident Celia Helen DeWit, a teacher for 35 years, died April 19, 2021 at the Citrus Nursing Center in Fontana. She was 77.

Mrs. DeWit was born March 25, 1944 in Upland, the youngest of six children of Luis and Conception Guillen.

She attended Gird Elementary, except for a year or two when the school couldn’t accommodate the growth and she was bused to the Chino Airport where classes were held in a barrack.

She attended Chino Junior High School which was located west of the current Chino district headquarters, and Chino High School, where she was in band and sports, including the field hockey team. She was also on the school newspaper “The Lariat” and joined the nursing club. She graduated in 1962, wearing the golden cord.

At Upland College, she played basketball and was catcher on the softball team before the school closed. While there, she decided to pursue a teaching career.

She attended La Verne College for a semester, and married Richard DeWit in 1965.

She transferred to Cal Poly Pomona and graduated in 1968 while pregnant with her daughter.

Her first teaching position was fifth grade at Newman Elementary School in 1972. Many of the boys were from the former Hillview Acres Children’s Home on East End Avenue.

Mrs. DeWit also taught fourth and sixth grade before transferring to Dickson Elementary School when it opened. She transferred to Townsend Junior High in 1986 the year it opened and made her final move to Canyon Hills Junior High where she taught for 15 years.

She retired in 2006 after 35 years of teaching and was named Teacher of the Year. She served as a teachers’ union representative.

While her children were in school, she served as team mom for their sports teams, was an AYSO Soccer girls’ commissioner for one year, was involved in the Don Lugo High School sports boosters volunteering at the fireworks booth, and was scorekeeper for the softball team.

Over the last many years, her biggest joy was being involved in the lives of her grandchildren, attending their games and events.

She was a lover of sports. Her favorites were the Dodgers, college softball, gymnastics, ice skating and the Lakers.

She is survived by her husband of 55 years, Richard DeWit; children Richard DeWit (Amy) and Kelly Lockman (Don); siblings Margaret Chacon and David Guillen; and grandchildren Emily and Abby Lockman, and Grace and Jack DeWit.

Viewing will be held from 2 to 5 p.m. Tuesday, June 1 at Funeraria del Angel in Chino. Church services will be held at 10:30 a.m. Wednesday, June 2 at Ontario Unified Reformed Church. Burial will take place at 1:45 p.m. at Riverside National Cemetery, 22495 Van Buren Blvd. in Riverside.