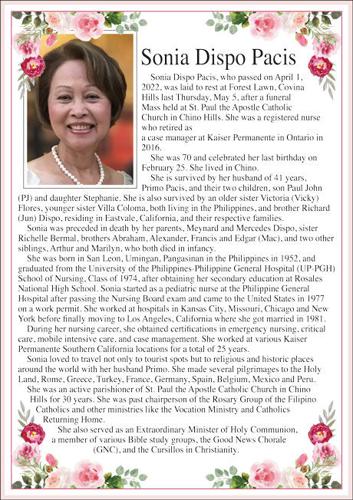 Sonia Dispo Pacis, who passed on April 1, 2022, was laid to rest at Forest Lawn, Covina Hills last Thursday, May 5, after a funeral Mass held at St. Paul the Apostle Catholic Church in Chino Hills. She was a registered nurse who retired as

a case manager at Kaiser Permanente in Ontario in 2016.

She was 70 and celebrated her last birthday on February 25. She lived in Chino.

She is survived by her husband of 41 years,

Primo Pacis, and their two children, son Paul John (PJ) and daughter Stephanie. She is also survived by an older sister Victoria (Vicky) Flores, younger sister Villa Coloma, both living in the Philippines, and brother Richard (Jun) Dispo, residing in Eastvale, California, and their respective families.

Sonia was preceded in death by her parents, Meynard and Mercedes Dispo, sister Richelle Bermal, brothers Abraham, Alexander, Francis and Edgar (Mac), and two other siblings, Arthur and Marilyn, who both died in infancy.

She was born in San Leon, Umingan, Pangasinan in the Philippines in 1952, and graduated from the University of the Philippines-Philippine General Hospital (UP-PGH) School of Nursing, Class of 1974, after obtaining her secondary education at Rosales National High School. Sonia started as a pediatric nurse at the Philippine General Hospital after passing the Nursing Board exam and came to the United States in 1977 on a work permit. She worked at hospitals in Kansas City, Missouri, Chicago and New York before finally moving to Los Angeles, California where she got married in 1981.

During her nursing career, she obtained certifications in emergency nursing, critical care, mobile intensive care, and case management. She worked at various Kaiser Permanente Southern California locations for a total of 25 years.

Sonia loved to travel not only to tourist spots but to religious and historic places around the world with her husband Primo. She made several pilgrimages to the Holy Land, Rome, Greece, Turkey, France, Germany, Spain, Belgium, Mexico and Peru.

She was an active parishioner of St. Paul the Apostle Catholic Church in Chino Hills for 30 years. She was past chairperson of the Rosary Group of the Filipino Catholics and other ministries like the Vocation Ministry and Catholics Returning Home.

She also served as an Extraordinary Minister of Holy Communion, a member of various Bible study groups, the Good News Chorale (GNC), and the Cursillos in Christianity.