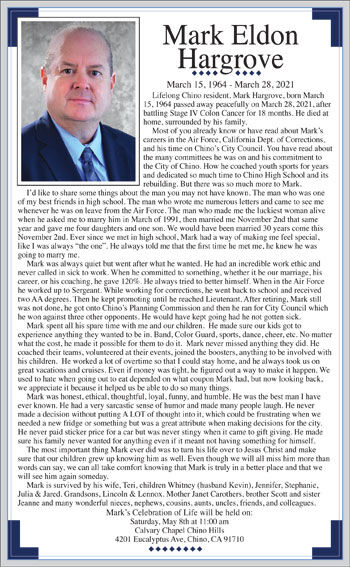 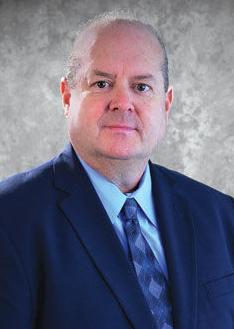 Most of you already know or have read about Mark’s careers in the Air Force, California Dept. of Corrections, and his time on Chino’s City Council. You have read about the many committees he was on and his commitment to the City of Chino. How he coached youth sports for years and dedicated so much time to Chino High School and its rebuilding. But there was so much more to Mark.

I’d like to share some things about the man you may not have known. The man who was one of my best friends in high school. The man who wrote me numerous letters and came to see me whenever he was on leave from the Air Force. The man who made me the luckiest woman alive when he asked me to marry him in March of 1991, then married me November 2nd that same year and gave me four daughters and one son. We would have been married 30 years come this November 2nd. Ever since we met in high school, Mark had a way of making me feel special, like I was always “the one”. He always told me that the first time he met me, he knew he was going to marry me.

Mark was always quiet but went after what he wanted. He had an incredible work ethic and never called in sick to work. When he committed to something, whether it be our marriage, his career, or his coaching, he gave 120%. He always tried to better himself. When in the Air Force he worked up to Sergeant. While working for corrections, he went back to school and received two AA degrees. Then he kept promoting until he reached Lieutenant. After retiring, Mark still was not done, he got onto Chino’s Planning Commission and then he ran for City Council which he won against three other opponents. He would have kept going had he not gotten sick.

Mark spent all his spare time with me and our children.  He made sure our kids got to experience anything they wanted to be in. Band, Color Guard, sports, dance, cheer, etc. No matter what the cost, he made it possible for them to do it.  Mark never missed anything they did. He coached their teams, volunteered at their events, joined the boosters, anything to be involved with his children.  He worked a lot of overtime so that I could stay home, and he always took us on great vacations and cruises. Even if money was tight, he figured out a way to make it happen. We used to hate when going out to eat depended on what coupon Mark had, but now looking back, we appreciate it because it helped us be able to do so many things.

Mark was honest, ethical, thoughtful, loyal, funny, and humble. He was the best man I have ever known. He had a very sarcastic sense of humor and made many people laugh. He never made a decision without putting A LOT of thought into it, which could be frustrating when we needed a new fridge or something but was a great attribute when making decisions for the city. He never paid sticker price for a car but was never stingy when it came to gift giving. He made sure his family never wanted for anything even if it meant not having something for himself.

The most important thing Mark ever did was to turn his life over to Jesus Christ and make sure that our children grew up knowing him as well. Even though we will all miss him more than words can say, we can all take comfort knowing that Mark is truly in a better place and that we will see him again someday.

Mark’s Celebration of Life will be held on: