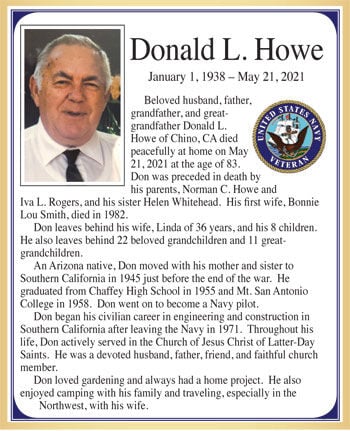 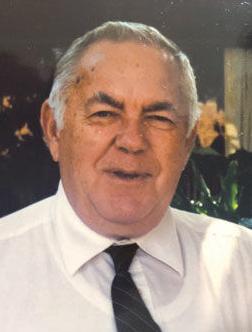 Beloved husband, father, grandfather, and great-grandfather Donald L. Howe of Chino, CA died peacefully at home on May 21, 2021 at the age of 83.  Don was preceded in death by his parents, Norman C. Howe and Iva L. Rogers, and his sister Helen Whitehead.  His first wife, Bonnie Lou Smith, died in 1982.

An Arizona native, Don moved with his mother and sister to Southern California in 1945 just before the end of the war.  He graduated from Chaffey High School in 1955 and Mt. San Antonio College in 1958.  Don went on to become a Navy pilot.

Don began his civilian career in engineering and construction in Southern California after leaving the Navy in 1971.  Throughout his life, Don actively served in the Church of Jesus Christ of Latter-Day Saints.  He was a devoted husband, father, friend, and faithful church member.

Don loved gardening and always had a home project.  He also enjoyed camping with his family and traveling, especially in the Northwest, with his wife.