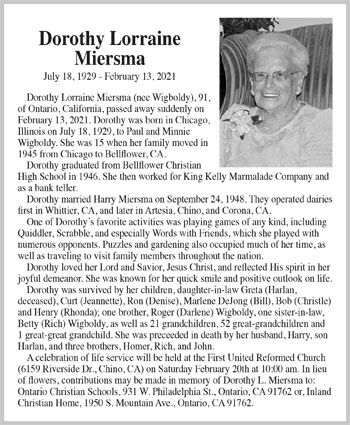 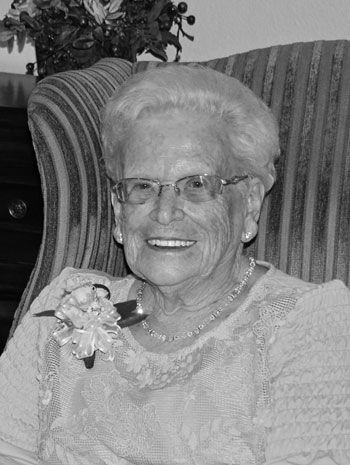 Dorothy Lorraine Miersma (nee Wigboldy), 91, of Ontario, California, passed away suddenly on February 13, 2021. Dorothy was born in Chicago, Illinois on July 18, 1929, to Paul and Minnie Wigboldy. She was 15 when her family moved in 1945 from Chicago to Bellflower, CA.

Dorothy graduated from Bellflower Christian High School in 1946. She then worked for King Kelly Marmalade Company and as a bank teller.

One of Dorothy’s favorite activities was playing games of any kind, including Quiddler, Scrabble, and especially Words with Friends, which she played with numerous opponents. Puzzles and gardening also occupied much of her time, as well as traveling to visit family members throughout the nation.

Dorothy loved her Lord and Savior, Jesus Christ, and reflected His spirit in her joyful demeanor. She was known for her quick smile and positive outlook on life.

A celebration of life service will be held at the First United Reformed Church (6159 Riverside Dr., Chino, CA) on Saturday February 20th at 10:00 am. In lieu of flowers, contributions may be made in memory of Dorothy L. Miersma to: Ontario Christian Schools, 931 W. Philadelphia St., Ontario, CA 91762 or, Inland Christian Home, 1950 S. Mountain Ave., Ontario, CA 91762.