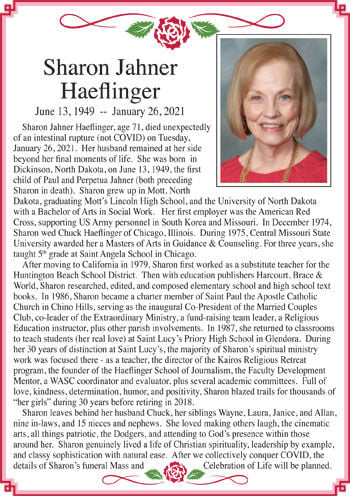 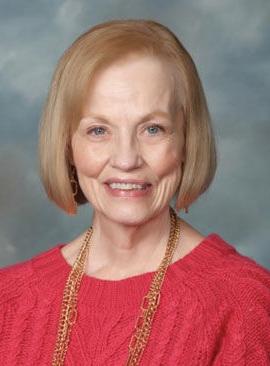 Sharon Jahner Haeflinger, age 71, died unexpectedly of an intestinal rupture (not COVID) on Tuesday, January 26, 2021.  Her husband remained at her side beyond her final moments of life.  She was born in Dickinson, North Dakota, on June 13, 1949, the first child of Paul and Perpetua Jahner (both preceding Sharon in death).  Sharon grew up in Mott, North Dakota, graduating Mott’s Lincoln High School, and the University of North Dakota with a Bachelor of Arts in Social Work.   Her first employer was the American Red Cross, supporting US Army personnel in South Korea and Missouri.  In December 1974, Sharon wed Chuck Haeflinger of Chicago, Illinois.  During 1975, Central Missouri State University awarded her a Masters of Arts in Guidance & Counseling.

After moving to California in 1979, Sharon first worked as a substitute teacher for the Huntington Beach School District.  Then with education publishers Harcourt, Brace & World, Sharon researched, edited, and composed elementary school and high school text books.  In 1986, Sharon became a charter member of Saint Paul the Apostle Catholic Church in Chino Hills, serving as the inaugural Co-President of the Married Couples Club, co-leader of the Extraordinary Ministry, a fund-raising team leader, a Religious Education instructor, plus other parish involvements.  In 1987, she returned to classrooms to teach students (her real love) at Saint Lucy’s Priory High School in Glendora.  During her 30 years of distinction at Saint Lucy’s, the majority of Sharon’s spiritual ministry work was focused there - as a teacher, the director of the Kairos Religious Retreat program, the founder of the Haeflinger School of Journalism, the Faculty Development Mentor, a WASC coordinator and evaluator, plus several academic committees.  Full of love, kindness, determination, humor, and positivity, Sharon blazed trails for thousands of “her girls” during 30 years before retiring in 2018.

Sharon leaves behind her husband Chuck, her siblings Wayne, Laura, Janice, and Allan, nine in-laws, and 15 nieces and nephews.  She loved making others laugh, the cinematic arts, all things patriotic, the Dodgers, and attending to God’s presence within those around her.  Sharon genuinely lived a life of Christian spirituality, leadership by example, and classy sophistication with natural ease.  After we collectively conquer COVID, the details of Sharon’s funeral Mass and Celebration of Life will be planned.