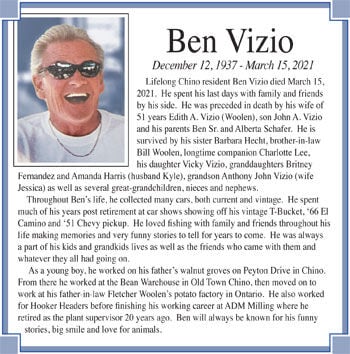 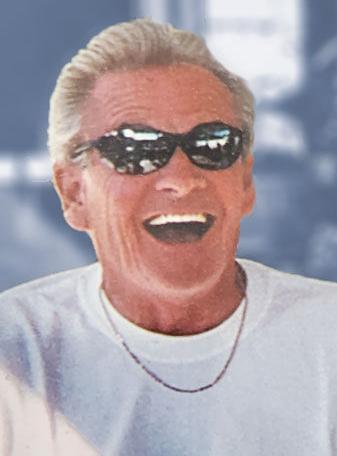 Lifelong Chino resident Ben Vizio died March 15, 2021.  He spent his last days with family and friends by his side.  He was preceded in death by his wife of 51 years Edith A. Vizio (Woolen), son John A. Vizio and his parents Ben Sr. and Alberta Schafer.  He is survived by his sister Barbara Hecht, brother-in-law Bill Woolen, longtime companion Charlotte Lee, his daughter Vicky Vizio, granddaughters Britney Fernandez and Amanda Harris (husband Kyle), grandson Anthony John Vizio (wife Jessica) as well as several great-grandchildren, nieces and nephews.

Throughout Ben’s life, he collected many cars, both current and vintage.  He spent much of his years post retirement at car shows showing off his vintage T-Bucket, ‘66 El Camino and ‘51 Chevy pickup.  He loved fishing with family and friends throughout his life making memories and very funny stories to tell for years to come.  He was always a part of his kids and grandkids lives as well as the friends who came with them and whatever they all had going on.

As a young boy, he worked on his father’s walnut groves on Peyton Drive in Chino.  From there he worked at the Bean Warehouse in Old Town Chino, then moved on to work at his father-in-law Fletcher Woolen’s potato factory in Ontario.  He also worked for Hooker Headers before finishing his working career at ADM Milling where he retired as the plant supervisor 20 years ago.  Ben will always be known for his funny stories, big smile and love for animals.