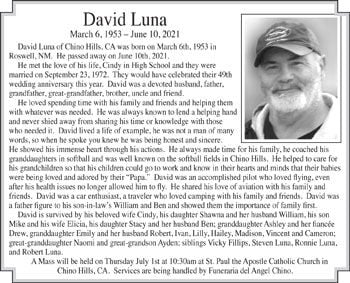 He met the love of his life, Cindy in High School and they were married on September 23, 1972.  They would have celebrated their 49th wedding anniversary this year.  David was a devoted husband, father, grandfather, great-grandfather, brother, uncle and friend.

He loved spending time with his family and friends and helping them with whatever was needed.  He was always known to lend a helping hand and never shied away from sharing his time or knowledge with those who needed it.  David lived a life of example, he was not a man of many words, so when he spoke you knew he was being honest and sincere.  He showed his immense heart through his actions.  He always made time for his family, he coached his granddaughters in softball and was well known on the softball fields in Chino Hills.  He helped to care for his grandchildren so that his children could go to work and know in their hearts and minds that their babies were being loved and adored by their “Papa.”  David was an accomplished pilot who loved flying, even after his health issues no longer allowed him to fly.  He shared his love of aviation with his family and friends.  David was a car enthusiast, a traveler who loved camping with his family and friends.  David was a father figure to his son-in-law’s William and Ben and showed them the importance of family first.

A Mass will be held on Thursday July 1st at 10:30am at St. Paul the Apostle Catholic Church in Chino Hills, CA.  Services are being handled by Funeraria del Angel Chino.