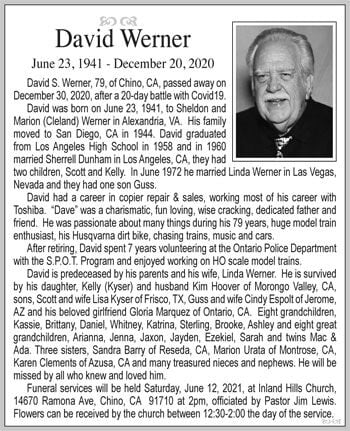 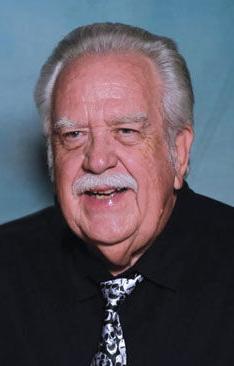 David was born on June 23, 1941, to Sheldon and Marion (Cleland) Werner in Alexandria, VA.  His family moved to San Diego, CA in 1944. David graduated from Los Angeles High School in 1958 and in 1960 married Sherrell Dunham in Los Angeles, CA, they had two children, Scott and Kelly.  In June 1972 he married Linda Werner in Las Vegas, Nevada and they had one son Guss.

David had a career in copier repair & sales, working most of his career with Toshiba.  “Dave” was a charismatic, fun loving, wise cracking, dedicated father and friend.  He was passionate about many things during his 79 years, huge model train enthusiast, his Husqvarna dirt bike, chasing trains, music and cars.

After retiring, David spent 7 years volunteering at the Ontario Police Department with the S.P.O.T. Program and enjoyed working on HO scale model trains.

David is predeceased by his parents and his wife, Linda Werner.  He is survived by his daughter, Kelly (Kyser) and husband Kim Hoover of Morongo Valley, CA, sons, Scott and wife Lisa Kyser of Frisco, TX, Guss and wife Cindy Espolt of Jerome, AZ and his beloved girlfriend Gloria Marquez of Ontario, CA.  Eight grandchildren, Kassie, Brittany, Daniel, Whitney, Katrina, Sterling, Brooke, Ashley and eight great grandchildren, Arianna, Jenna, Jaxon, Jayden, Ezekiel, Sarah and twins Mac & Ada. Three sisters, Sandra Barry of Reseda, CA, Marion Urata of Montrose, CA, Karen Clements of Azusa, CA and many treasured nieces and nephews. He will be missed by all who knew and loved him.