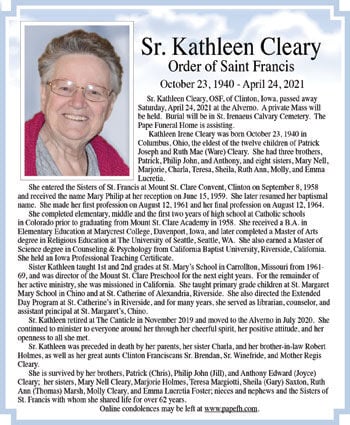 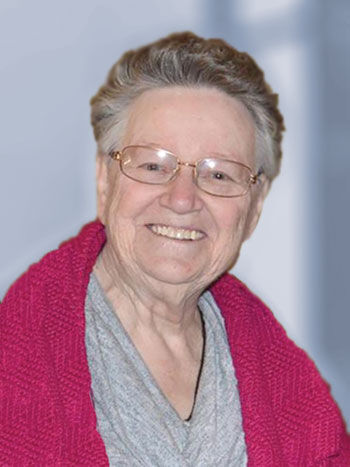 Sr. Kathleen Cleary, OSF, of Clinton, Iowa, passed away Saturday, April 24, 2021 at the Alverno.  A private Mass will be held.  Burial will be in St. Irenaeus Calvary Cemetery.  The Pape Funeral Home is assisting.

She completed elementary, middle and the first two years of high school at Catholic schools in Colorado prior to graduating from Mount St. Clare Academy in 1958.  She received a B.A. in Elementary Education at Marycrest College, Davenport, Iowa, and later completed a Master of Arts degree in Religious Education at The University of Seattle, Seattle, WA.  She also earned a Master of Science degree in Counseling & Psychology from California Baptist University, Riverside, California. She held an Iowa Professional Teaching Certificate.

Sister Kathleen taught 1st and 2nd grades at St. Mary’s School in Carrollton, Missouri from 1961-69, and was director of the Mount St. Clare Preschool for the next eight years.  For the remainder of her active ministry, she was missioned in California.  She taught primary grade children at St. Margaret Mary School in Chino and at St. Catherine of Alexandria, Riverside.  She also directed the Extended Day Program at St. Catherine’s in Riverside, and for many years, she served as librarian, counselor, and assistant principal at St. Margaret’s, Chino.

Sr. Kathleen retired at The Canticle in November 2019 and moved to the Alverno in July 2020.  She continued to minister to everyone around her through her cheerful spirit, her positive attitude, and her openness to all she met.

Sr. Kathleen was preceded in death by her parents, her sister Charla, and her brother-in-law Robert Holmes, as well as her great aunts Clinton Franciscans Sr. Brendan, Sr. Winefride, and Mother Regis Cleary.

Online condolences may be left at www.papefh.com.