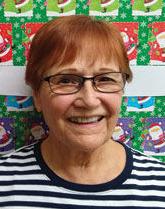 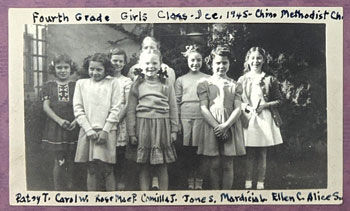 This photo of the fourth grade girls’ Sunday School class was taken in December 1945.

On Dec. 31, 1999, the Chino United Methodist Church family gathered on New Year’s Eve to enjoy food, fellowship, and worship, welcoming not just the new year, but a whole new century and a brand-new millennium.

In the spring of 2000, cleaning began. We were fortunate to have some pieces of furniture donated that were used to rearrange the parlor, choir room, music room, and the new room built off the left side of the sanctuary, past the organ.

The new room was to be used for meditation and prayer, small meetings or pastoral counseling. Pac Bell began installing its equipment for wireless phones in the church bell tower on Monday, Oct. 2.

After two years of upgrade, the church celebrated the improved pipe organ during the Sunday morning worship on Oct. 29.

Prayers were appreciated after the 9-11 terrorist attack on Sept. 11 of the World Trade Center and Pentagon.

A “Getting to Know You” picnic was held May 19 at the home of Richard Bentley. Old and new members participated.

Teckla Konold retired from her position as the church secretary/administrative assistant/gal Friday when she moved to the Bay area.

The Boy Scouts installed a new floor in the social hall as an Eagle Scout project for Kevin Wedgworth.

On Sept. 8, 2002, United Methodist churches across the country held special services in remembrance of the events of 9-11, and on Sept. 11, a service was held in front of Chino City Hall.

A new church secretary, Cora Rogusa, was welcomed on Oct. 13. The renovation of the social hall continued with Isaiah’s Rock doing the painting and the Calico Rompers square dance club supplying the paint.

The church filled 72 baskets of food for Thanksgiving.

In addition to marching in the Chino Christmas parade, the church again had a booth on the front lawn to dispense hot drinks and donuts.

Landscaping was redone along Riverside Drive. A 70-foot tree was trimmed, old grass and plants were removed, and a new sprinkler system was installed.

After worship on Jan. 23, 2003, the church family dedicated the new garden and landscaping along Riverside Drive in memory of Charley Stortz.

Cub Scout Pack 205 moved to the church. The pack was already established with 30 years of service.

After discussion about our identity, place in the community, and mission, the church voted to keep its present name.

In September, a new sign on Riverside Drive proclaimed the church’s name in great big letters and lifted up the cross-and-flame logo of the United Methodist Church. The new church sign was dedicated during worship on Feb. 22, 2004.

On Sunday, Aug. 15, Bishop Mary Ann Swenson preached at the worship service and joined parishioners in the social hall after the service for a presentation of African music and displays featuring the problems facing children and potential solutions for those problems.

Kenyan crafts were sold, and light refreshments were served. The parking lot was repaved. The dedication of the nursery windows was held Sunday, Oct. 17, 2004. We carried on!