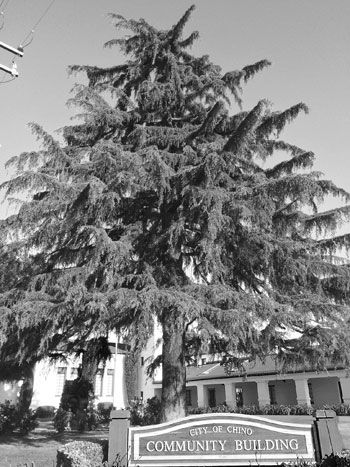 I was recently wandering around town looking at old buildings and investigating details as research for stories, when I happened upon a giant pine tree at the Community Building next to the memorial for fallen soldiers.

Initially the round, fat trunk grabbed my attention. Then my eyes followed up to the branches, and while standing under the tree, I was not able to see the top. The tree was very tall, so I backed to the corner of 10th and B Streets to be able to view the whole majestic tree. A stone at the front of the tree has a plaque that reads, “This tree planted by Mr. & Mrs. Geo. V. Holcomb in memory of Veterans of World War I.”

George Holcomb was the son of William Holcomb, a miner who discovered gold and brought on the gold rush in the Big Bear area. The discovery made William Holcomb a prominent figure. So much so, that Holcomb Valley there was named after him. Son George attended fine schools in San Bernardino, and at a young age owned a store there. In 1894, George moved to the dusty town of Chino. There he opened a new all-purpose store, on the south west corner of 6th and D Street.

The store sold many things, such as dry goods, ice cream, soda water and even cigars. George was more than just a merchant. He was also the deputy county clerk for the Chino District for 33 years, was the city’s police judge for five years, and was the second president of the city’s chamber of commerce, which he helped form. In 1919, George formed a partnership with his former employee, Elmer Jertberg, and purchased the building in which he ran their business.

In 1936, at age 67, George Holcomb passed away from an ongoing illness relating to a heart ailment. His  children inherited the Holcomb-Jertberg Building, and Mr. Jertberg signed over his interest to them as well. In 1938 they sold the building to Mr. and Mrs. H.R. Miller.

It must have been sometime in the 1930s that George Holcomb planted the pine tree to honor the veterans of World War I. The plaque was placed at the tree in 1946, during a ceremony by the American Legion, in memory of George Holcomb. Mr. Jertberg was called upon to design the memorial and plan the program. Publication at the time stated the tree had been planted several years before.

The tree that has been called The Living Christmas Tree has grown in its 85 years, and the trunk continues to expand to support the sweeping branches that honor the veterans who fought for our country. Drive by sometime and see the tree…and take a moment to remember George Holcomb, our early civic leader, and the veterans he honored.