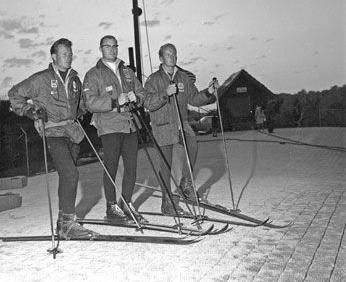 Chino is known for many different things, but a snow and a ski resort is probably not among them.

Before Chino Hills was officially a city, a year round artificial ski resort was built in Carbon Canyon, behind the Canyon Hills Riding Club. In 1966, investors John F. Kramer, who was a resident of Carbon Canyon, and Randy Randazzo, owner of a plastics company in Gardena, spent $750,000 to build a 4-acre ski slope located within 142 acres, to become a ski resort near Sleepy Hollow, that was called Ski-Villa. The slope was made of millions of 6 by 6-inch interlocking plastic pieces with grass like fingers, glued over graded concrete.

Ski lifts towed up to distances of 200, 400 and 1,100 feet. It was the first ever year around ski resort in the United States, and the owner had hoped to expand the slopes to eventually become 80 acres. The idea had been a successful business for three years near Tokyo, Japan, and the owners expected it would be as successful in Chino.

The owners intended on selling franchises of their unique business once it took off.  Price of admission to ski the slopes was $3 to $5, which was affordable, but would require many skiers to be profitable.  The resort featured an Alpine-themed restaurant and cocktail lounge, ski shop, ski patrol office and first aid. It even offered Austrian ski instructors and night time lighted skiing times.

Advertisements in the Los Angeles Times touted the resort as a “Mammoth bowl covered in plastic snow that skis like two inches of powder.” The investment gamble had its issues, that came when skiers realized that falling on a plastic slope caused more injuries and rubbed burns than skiing on snow. The injuries were not the best word of mouth advertisement for the villa. Other ski fans simply didn’t have the nerve to attempt to ski on an artificial turf.  Also, the oft warm days seemed even warmer on the white plastic tiles. The grand idea did not catch on, and within three years the resort closed, the plastic tiles were pulled up from the slopes and the area was abandoned. In 1989 a tract of homes was approved by the county for the site before the city was incorporated. After a number of delays, homes have been built on the site.

I have been told by a few that they have trekked through the hills where Ski-Villa once was and they have found random old white plastic ski tiles…a piece of the long forgotten artificial snow slopes.