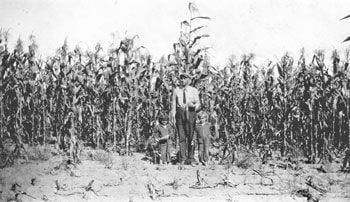 One of Decker’s famous fresh corn and vegetable stands, at Chino Avenue and Cypress.

When one first thinks of Chino, cows may come to mind, but an even more delicious thought is the corn that was grown throughout the area. I remember driving down Pipeline Avenue in the 1980s, passing Eucalyptus and being surrounded by fields of corn.  In the 1990s, the fields slowly disappeared, and the land that once was home to this sweet crop became a shopping center called The Chino Spectrum, and eventually others.

One person who grew and sold it locally was Henry “Hank” Decker, through his Decker Farms. Hank’s father Fred began growing it here in the 1940s. Hank took over in 1950 and began selling sweet corn from his stand on the southwest corner of Mountain Avenue and Riverside Drive. By 1984, he was farming over 40 acres of sweet corn, potatoes, black eyed peas, red onions, carrots and tomatoes.

Hank personally walked his fields daily and believed the crops grew well in Chino due to the sand-like soil that helped maintain moisture. A second stand was opened on the east side of Central Avenue, just north of Schaefer, where the Arco Gas Station sits now.

Decker Farms was a family business.  Hank’s daughters Shannon, Lisa and Danielle all worked growing and selling the famous Decker Corn. Hank’s wife Hallie, who owned and operated Hallie’s Fashions, on the southwest corner of Riverside Drive and Central Avenue, also helped sell the produce when not working at her dress shop.

Local high school students were hired for the corn packing shed. Each day started at 7 a.m. when a tractor would pull a trailer through the rows of corn. The pickers would throw the ears into the trailer.  Back at the shed, ladies would pack 5 dozen ears to a crate, then roll them off to the cooler, which consisted of a large tank wide enough for five crates to fit next to each other, filled with water and huge blocks of ice. There was no refrigeration. At the end of the day the corn would be loaded on a small flatbed truck and hauled off to the market in Los Angeles.

In 2001 the stand was relocated to Chino Avenue and Cypress when the land was sold by the owner and developed into housing. In 2004, the stand on Central Avenue north of Schaefer also closed and now holds a commercial complex. The Chino and Cypress stand is no longer owned by Hank Decker.  Many people have shared with me memories of buying Decker corn during the summer, and feasting on it at picnics and barbecues.  They all say the same thing: There was nothing else like it, and they sure do miss it.