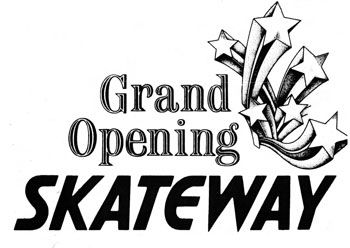 Roller skating had always been a popular activity, and in the 1980's it became a phenomenon.  The 1979 film Roller Boogie, starring Linda Blair added to the popularity, and suddenly roller skating wasn’t just for kids. The nearest skating rink to Chino had been The Roller Palladium in Pomona or Holiday Skating Rink in Montclair.

A real estate investor named Roger Clark saw the need for a skating rink in Chino. After the city had approved the project, he approached city planning commissioner Allen Jackson and asked him to manage the business. Allen took on the challenge and with a staff of over 40  Skateway opened on Central Avenue, just south of the 60 Freeway, on September 12, 1980.  2,900 people skated that opening night, and for the next year, Friday and Saturday nights averaged 1,600 skaters.

Over 50 birthday parties were celebrated each weekend. Skateway was a safe, clean place  for people to skate to the latest music on a smooth rink made of seamless plastic, and to enjoy food at the snack bar and play pinball machines and arcade games. If you were lucky enough, Jim Bray, a star from the film "Roller Boogie," may have been spinning records as a DJ.

Parents would drop off their kids to skate all day for less than $5.  There was couples skating, backwards skating and Hokey Pokey games.

Skateway was very active in the community and beyond.  Its costumed mascots Roller Bear and Roller Rabbit would make appearances at Chino schools, and schools held parties at the rink. Skateway hosted the Inland Empire Artistic Skating Championship in 1986.

The increasing cost of liability insurance and dwindling interest in roller skating caused Skateway to close on September 2, 1988. Laguna Land and Cattle Company had purchased the building and had plans to turn the property into retail stores.

In October 1988, giant balls of fire shot 100 feet into the sky as the building, under reconstruction, became ablaze that Saturday night. I happened to be working at Newsboy Books and Video in the shopping center just behind it and remember opening the back door to see and feel the heated flames.

The fire caused over 2 million dollars in damage, which put a halt to the plans to open retail stores. The building sat vacant until 1992, when Southern California roller skating rink owner William Carlson opened Skate Express, still in operation.