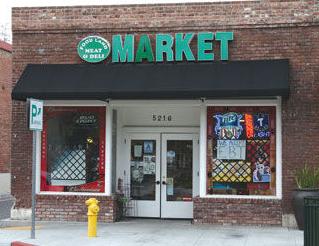 Foodland Market began serving Chino in 1945, when it opened on downtown Sixth Street. The owners were The Kuskey Brothers, Joseph, Paul and Edward, who purchased the business from William Rabinowitz. Mr. Rabinowitz had purchased it a year earlier from Hyman Byalos, who ran it as Quality Market.

The Kuskey Brothers remodeled the store, only to sell it in 1948 to William Weik. The store changed hands again in 1949 to J.B. Harris.  In 1956 Grant Griffin, the butcher at the store, purchased it.

That same year, Grant Griffin closed the store early on a Monday to attend his son’s Little League baseball game. Shortly after 7 pm, the Foodland Market was ablaze. Firemen limited the damage, estimated at $53,000, to the back portion. Nobody was harmed. The money from the register had been dropped into the cooler for safe keeping.

Grant Griffin sold the market in 1961 to William Coleman and his son Richard, who owned another store in Westminster. They would run Foodland for 16 years and endure much drama.

In 1967, two boys, ages 14 and 17, threw a brick through the glass of the back door. The 5 a.m. noise awakened William Coleman, age 63, who was asleep in a room at the back of the store. He grabbed his shotgun and in the hallway saw two male figures. He demanded that they stop, and reached for the telephone to summon the police. One continued to approach him, so he fired, shooting the 17-year- old Chino High School student in the stomach. The boy died upon arrival at the hospital. The 14-year-old was taken into custody. The two were linked to  robberies that had occurred during the week at Patty’s Pastry Shop and Cliff’s Country Corner.

The 1967 incident was not the last time William Coleman would deal with a burglary. On September 27, 1975, he found two teenagers attempting to rob the market. When they lunged at him, he fired four shots, hitting both. A 17-year-old died from his wounds. A 16-year-old recovered from injuries.

In 1977 the Colemans sold Foodland Market to Seung Koo Min, who still owns it 40 years later.

In 1978 the new owner was approached at the counter by a man with a tire iron, who demanded money from the register. When Seung Koo refused, he was struck twice with the weapon. The robber hammered on the cash register with the iron, attempting to open it. The proprietor, with a butcher knife in hand, chased the thief out of his store.

In 2003 the city was acquiring properties on Sixth Street for redevelopment. It planned to raze the buildings and create a town square, now known as Aguiar Square. Foodland was relocated to 5216 D Street in the old McClean’s Stationery Store. The market was thus reduced from 4,300 to 1,600 square feet. Seung Koo Min was paid a settlement of $166,945 for relocating.

The brickwork and historical features make it an impressive building to see. Through much drama and many owners, Foodland Market is the longest running market in Chino.