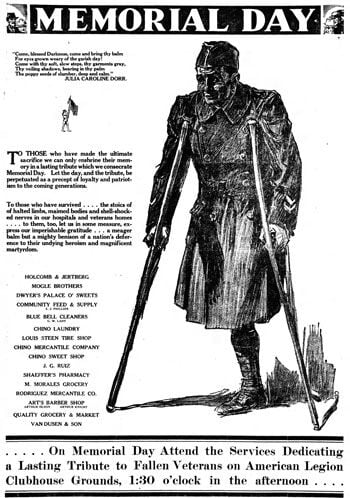 In 1930, the Chino American Legion Post created a monument to honor those who served and died in World War I. The monument, made of stone with an eagle at the top, was installed next to Chino’s Community Building on 10th and B Streets. A letter written by Chamber of Commerce President Elmer L. Howell was published on the front page of the Champion Newspaper, requesting the attendance of the citizens of Chino at the unveiling of the monument on Memorial Day. The Memorial Day ceremony would become an annual tradition for the people of Chino.

In 1969, Ken Bolton, the father of serviceman Dennis Lewis Bolton who was killed in Vietnam, requested that the war memorial be moved from the side of the Community Building to the front of the center lawn, so that it would be more visible.

The war memorial was moved and plaques were added for World War II, Korean and Vietnam Wars. Plaques for Desert Storm and Iraqi Freedom have since been added and the American Legion Post continues its Memorial Day tradition of honoring those who died from sickness or wounds received from serving, or killed while in combat.

The war memorial is easily accessible and can be visited on any day, at any time.

Howard Galbreath was a Chinoan who started Galbreath Insurance that became Galbreath and Pine Insurance, located next to the new Chino Movie Theater on Central Avenue, south of Riverside Drive. During the Korean War, Howard, a lieutenant colonel in the Air Force reserve and pilot, was returned to active duty. Sadly, Howard was killed in 1952 in a plane crash in Japan.

I stopped at the Community Building recently to look at the memorial for fallen soldiers when the nearby tree caught my eye. Initially the round, fat trunk of the pine tree grabbed my attention. The tree was very tall, so I backed to the corner of the street to be able to view the majestic tree. There is a stone at the front of the tree, with a plaque that reads, “This tree planted by Mr. & Mrs. Geo. V. Holcomb in memory of Veterans of World War I.” George Holcomb was the son of William Holcomb, a miner who discovered gold as part of the gold rush in the Big Bear area of the San Bernardino Mountains.

The discovery made William Holcomb a prominent figure. So much so, that a valley there was named Holcomb Valley after him.

George Holcomb attended fine schools in San Bernardino, and at a young age owned a store there. In 1894, George moved to the dusty town of Chino. There he opened a new all-purpose store, on the southwest corner of Sixth and D streets.

The store sold many things, such as dry goods, ice cream, soda water and cigars. George was more than just a merchant. He was also the Deputy County Clerk for the Chino District for 33 years, the city’s Police Judge for five years, and helped form the city’s Chamber of Commerce, of which he served as the second president.

In 1919, George formed a partnership with his former employee, Elmer Jertberg, and purchased the building in which his business occupied. He ran their business until he fell ill and passed away in 1936.

It must have been sometime in the 1930s that George Holcomb planted the pine tree to honor the veterans of World War I.

The stone with the plaque was placed at the tree in 1946, during a ceremony by the American Legion, in memory of George Holcomb.

Elmer Jertberg was called upon to design the memorial and plan the program. Publication at the time stated the tree had been planted several years before, and didn’t provide information on the actual age of the tree.

The tree that has been called The Living Christmas Tree has grown in its 90 some years, and the trunk continues to expand to support the sweeping branches that honor those who fought for our country.

Drive by the Community Building sometime and take a look at the tree and the war memorial…and take a moment to remember Chino’s fallen and all who have served our country.  In this current age often filled with a “look at me” attitude, it’s important to honor others who paid the ultimate price for our freedom.