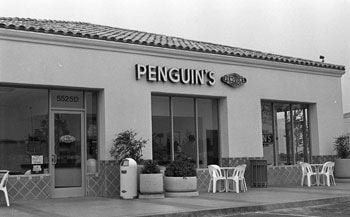 1987 brought the city of Chino an exciting new shopping center, built on the south side of Philadelphia Street, between Central Avenue and Benson.  Chino Town Square was the largest shopping center in Chino, and offered many dining choices, a deluxe movie theater and large department stores for shopping.

It was a pretty big deal when Mervyn's opened in the Chino Town Square on March 6, 1987.  Mervyn's was the first large major department store to come to Chino and was a popular go-to place for birthday and Christmas gifts.  Mervyn's sold clothing for everyone in the family, shoes, kitchenware, toys and some small electronics. I remember walking out with bags full of items for my family at Christmas time.  Due to an economic recession, Mervyn's filed for bankruptcy and began closing its stores.  After 21 years of business, the Chino Mervyn's closed in November 2008 and the building is now used by Burlington Coat Factory and Planet Fitness.

PACE Membership Warehouse was the first warehouse store to come to Chino, and was located in the Chino Town Square, near Burger King. The 100,000-square-foot store opened in 1987 and offered a new way to shop...in bulk!  PACE employed over 200 people and generated $40 million in annual sales.  In 1994 Kmart, that owned PACE, sold their membership stores to Walmart, and PACE became Sam's Club.  The Chino store eventually closed, and moved to the new location, on Pipeline and Grand avenues.

B. Dalton Bookseller, Chino's first major chain book store opened in the newly built Chino Town Square in 1988.  The book store sat in the middle of the shopping center and had a huge selection of over 5,000 books and magazines. They had special guests at their grand opening, including author Dean Koontz, and gave away free pencils and balloons.  The bookstore closed in 1998, after Barnes & Noble acquired it, and eventually liquidated the stores.

Marie Callender's Restaurant was just one of the many restaurants located within Chino Town Square.  Originally opened as Stox Restaurant in 1987, the restaurant became Marie Callender’s in 1994.  The dessert pies, cornbread and fresh, hot chicken pot pies were favorites of many in Chino.  I am told high rent caused the restaurant to close in 2016, and the building sits vacant today.  Other restaurants located within the shopping center included the very popular Sesame Inn, Graziano’s Pizza, Katie McGuire’s Pie Shop, Burger King and Foster’s Freeze.

AMC Theater opened in the Chino Town Square in 1988.  The AMC was the first modern theater to come to Chino, since the old Chino Theater opened on Central Avenue in 1947 and closed in 1959. The new theater had 10 screens, of which two were extra-large, and curved.  In 1989, I worked in the concession stand (as they called it), or the snack bar, as most others called it.  Our uniforms were black dress pants, a white button up shirt, black vest and a black bow tie.  It was a classy theater.  Employees had to take classes on customer service and food prep, and secret shoppers would come in to test us while we worked.  I worked a register and had to take orders, grab popcorn, pump butter, fill sodas and serve candy and hot dogs, all with a smile.  After closing, we would be there until after midnight cleaning and sweeping every kernel of popcorn off of the floor, and couldn't leave until we passed inspection by a manager.  As soon as we were finished, we were allowed to hang out and watch movies - sometimes seeing the newest film before everyone else. I remember watching the movie Dick Tracy, and feeling really special that I was able to see it earlier than most.  If we brought our own cup, we could fill it with soda, and then all of the employees who were awake enough, would stay until 3 a.m. watching a movie.  It was the most fun I had working a job.  The theater eventually closed when a new theater opened in Chino on Grand Avenue, which offered stadium seating.

After the movies, dessert was often had at the very popular Penguin's Frozen Yogurt.  Frozen yogurt was a new concept in the 1980s, and choosing a delicious flavor and topping was the perfect end to a night in Chino.  Chino Town Square is still operating today, but all of the original businesses, with the exception of Target and Burger King, are now gone.  There are new businesses in most of the buildings, and they just may be making memories for a whole new group of Chinoans.

Share your memories and feedback by email at Chinomemories@gmail.com.  Kerry Cisneroz, a longtime Chino Valley resident, enjoys sharing memories, images and nostalgia of the community, which can be found in his Facebook group, “Chino Memories – Yesterday & Today.”