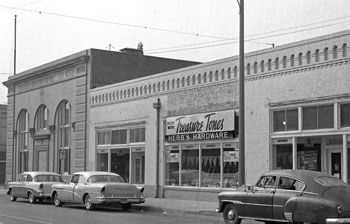 Before the existence of Home Depot and Lowe’s, Chinoans found their hardware needs at Herb’s Hardware. The store was located in downtown Chino, in the old Bank of America building (originally First National Bank) on the corner of 6th and D streets. The store was originally opened in 1909 by a Dutchman named CF Ten Eyck, and was called Ten Eyck Hardware. He ran the store until 1945, when due to poor health, he decided to sell the business to another Dutchman, Ed Plett. The name was changed to Plett Hardware until 1950, when Mr. Plett sold the business to employee Herb Bajema, and Herb’s Hardware was born.

After the Bank of America moved out Herb acquired the 6th Street frontage, doubling the size of the store.

Herb sold hardware, gardening tools, paint and some household goods. Later, he sold small kitchen appliances, which made his store a favorite place to purchase birthday and Christmas gifts, and became a popular place for brides to be registered for wedding gifts.  I have been told that Herb’s Hardware had everything one could need – from a small part to a rare part.  If Herb didn’t have what was needed in the store, he would disappear into the back, and most always appeared with the desired item.  Sometimes he wouldn’t even charge for the part.

“My dad took me to Herb’s,” is commonly stated when I share about Herb’s Hardware. It seems everyone at one time or another passed through the store.  Herb was also actively involved in the city and in 1979 he retired and left the store to his son Ken. Once retired, he joined a Barber Shop group, in which he sang bass. In 1990 he suffered a stroke, which left him partially paralyzed. The paralysis didn’t stop him from singing though. He continued travelling and performing with his group. He passed away in 1993 at age 77.

In 1984, Ken Bajema sold Herb’s Hardware to Rich Bockstahler, yet another employee who had entrepreneurial dreams of running the business. Rich kept the store’s name and business running as usual, including opening at 6 a.m. to serve the needs of local ranchers and dairies.

In the 1990s business slowed. The newly opened Home Depot on Walnut was fierce competition, and combined with the recession of that time, eventually led to the store’s closing In 1993. The building that had provided Chino with its construction and repair needs for over 80 years was vacant. Eventually, the Youth Museum took over the building and continues to occupy it today.