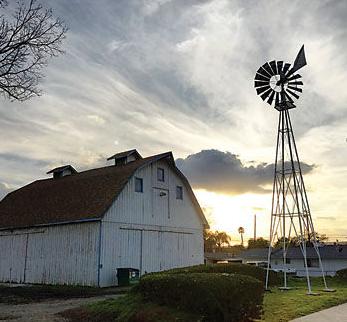 Have you seen the 94-year-old barn in Chino?

In 1923 Mr. and Mrs. Don Palmer built a house and a barn on 640 acres of land they owned on Pipeline Avenue, south of Riverside Drive. There they farmed 30 acres of mostly hay and alfalfa and stored up to 590 tons of hay in their cement floored barn. Mr. Palmer had used the finest wood to build, with the intention of it lasting a very long time. It was deemed the biggest barn in Chino, being 50 by 70 feet, with the height of the roof at 45 feet. Mr. Palmer would often give hayrides at the ranch and even held Easter egg hunts there.

In 1941 the Rancho Ride dance was held at the Palmer Barn.  Bands would often play there for dances and parties hosted by the Palmers.  It was quite the place to attend a special event.

In 1955 the Palmers sold the ranch to a fellow Chinoan, Ralph Crowley and his wife, owners of Western Auto, originally located downtown on D Street and eventually moved to Riverside Drive and 10th Street.

On their ranch the Crowleys raised beef and pigs. They also had peacocks roaming the property, which kids loved to chase. In 1956 a lightning bolt struck the enormous barn, nearly setting afire the 400 tons of hay stored inside. In 1971 a scene from the film “Deadhead Miles” was made at the barn.

In 1981 the Crowleys decided to move to Georgia, to be close to their children and grandchildren. The land was sold to Jodie and Donna Smith. Jodie subdivided the land, and built custom homes on Hacienda Lane, and also on Biscayne Street, which would run through the Palmer property and dead end at Pipeline Avenue. My parents built a home at the end of Biscayne Street in 1986 and I lived there for many years.

I could see the big old barn on the other side of the street, and marveled at it as I passed by. I have been told that Jodie Smith kept the barn, and developed around it, because it reminded him of his youth, growing up in Texas.  Jodie used the barn to build and repair hot air balloons, which he enjoyed flying.  The barn was also used as a spooky haunted house on many Halloween nights.

Through all of the changes in ownership, the barn remained, and still stands this day in the very location that Don Palmer carefully laid each piece of wood. If you drive down Pipeline Avenue, glance to the east, down Hacienda Lane, and you will see it. There have been many changes around it, but it hasn’t changed much itself.