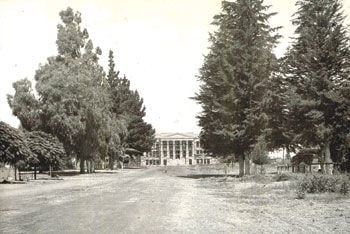 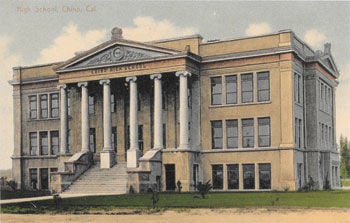 Chino built its first stand-alone secondary school, called Chino High School, in 1909 on Riverside Drive, facing south to the end of 6th Street, so that those getting off of the train at the nearby station, would see it. The first classes were held in the new school in September, 1910, with 70 students in attendance.

A 1910 Los Angeles Times full page story on Chino said “Chino offers to the farmer and the business man advantages for the education of their children. The newly completed three-story Chino High School commands the attention of the visitor. This is a beautiful $40,000 building to accommodate 300 students. Two well-kept lawns in the front add to the pleasing appearance of the grounds, and at the rear and the side of the building are tennis and basketball courts.”

Imagine such a grand building for a city with a population of less than 1,000. The cost today to build the $40,000 building would be approximately $965,000!  The building was beautiful, with six giant pillars surrounding steps that led to the doors. Ornate decorations framed the address that appeared near the roofline.

Unfortunately, the marvelous building would not last long.  After the 1932 Long Beach earthquake, concerns regarding the safety of the building caused the top two stories to be removed, along with the pillars.  Eventually a new site was sought to build a newer, larger high school. In 1948, 54.5 acres of land were purchased at 10th Street and Park Place.  In 1954 the first section of the new Chino High School opened.

Students have shared with me how they would have to walk from the old high school to the new for some classes, until the new school was completed, and the old school was torn down.

There are now plans to begin construction in 2019 to build a new Chino High at the same location, on the north side of the school property, facing Jefferson Avenue.  Once it has been built, the school district intends to tear down the current buildings that sit at the south side of the property, on Park Place.  A digital 3D model of the new computer age high school can be seen on Chino High  website.

History of the school building:

1948 - 55 acres purchased for a new school from Rancho Chino Corporation, a locally owned company of prominent citizens, at 10th and Park for $1,086 an acre.

1954 - The first section of Chino High opened on Park St., included two buildings with 10 classrooms and the boys shower and locker room.

1955 - All staff and students moved to the new campus. The girls shower and locker room and pool built.

1964 – The new gym opened. The old gym at Seventh and Riverside was purchased by the Portuguese DES organization.