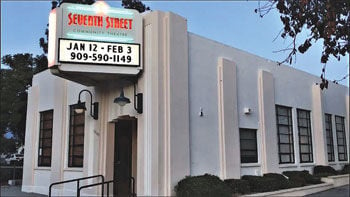 Chino Community Theatre and Children's Theatre was formed in 1984 by husband and wife team Paul and Karen Larson of Chino.  Both were local teachers who created the theatre groups for adults and children.

They had used the Chino Community Building and school multipurpose rooms as makeshift theatre locations, which weren't the most ideal places to rehearse or put on a show. The Chino Community Center Corporation, a group led by President Gretchen McCombs and Vice President Patti Aguiar, came together to transform the old GTE dial telephone center on Seventh Street, just south of C Street, into The Seventh Street Theatre, with the help of the city.

The telephone center was built in 1948 by Pomona Valley Telephone and Telegraph, which then became The Associated Telephone Company, and finally GTE. In 1959 a new telephone center was built at Yorba and Walnut avenues and the old dial center became a church. Chino’s Redevelopment Agency acquired the building from the church in 1989 as part of the civic center expansion program, and spent $50,000 to bring it up to code, and another $100,000 to transform it into a theatre.

In 1990 Bernie Wolfswinkel worked with the Chino Center Corporation to raise funds to complete the theatre.  Over $60,000 was raised, and on Saturday, March 16, 1991, the 91-seat theatre opened with a $100 per seat black tie optional party, which included a champagne dinner at the Senior Center, followed by a performance of a collection of acts from shows previously produced by Chino Community Theatre. The final act was a preview of the theatre's first production, On Golden Pond. Set to open the following Friday, the opening show was postponed a week because of the sudden death of lead actor Franklin "Bud" Chambers, who had given his last performance at the gala premiere party. His role was taken over by Howard Wilson.

The nonprofit theatre is run by volunteers, and in addition to a dozen or so different live productions a year, also offers workshops and classes to actors of all ages who wish to expand their talents.

The transformation of the dial center into The Seventh Street Theatre is a great example of how historical buildings can be preserved and used in a modern society.

(Follow up notes: On Sunday April 28 The Chino Cultural Foundation, successor to the Chino Community Center Corporation, will hold a dinner at the Senior Center followed by a performance at the Seventh Street Theatre of "Mamma Mia!" Details on the entertainment page."

(Bernie Wolfswinkel, named an Outstanding Citizen for his theatre work and other community service, is recovering from successful hip surgery this week.)

Kerry Cisneroz enjoys sharing memories and nostalgia of the community, found daily in his Facebook group, “Chino Memories – Yesterday & Today.”  At the Pioneer Picnic at the Community Building May 19 he will present memories and photos of Chino’s past.