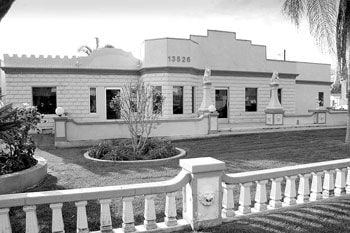 I’ve often wondered what the story was behind the castle-like building that sits at 13526 Central Avenue, on the west side, north of Schafer Avenue. I have driven by it hundreds of times, and have seen it change over the years, and my curiosity grew, so I decided to dig around and see what I could find out.

The building was built in 1923 as the home for cement contractor Henry Gonzales. Henry ran his business across the street from the home and performed large jobs for the City, such as laying sewage pipes under Chino Avenue. The home was built of custom-made cement blocks and decorated with ornate designs and cement figural lion statues. A small chapel was built at the back, as well as Chino’s first swimming pool. The property was truly an original design, and an obvious labor of love for Mr. Gonzales.

In 1979, he sold his home to The Loyal Order of Moose. The Loyal Order of Moose Chapter 597, and The Women of Moose Chapter 180 had been created in Chino in 1978 and had originally met at 6028 Riverside Drive (which no longer exists). The building on Riverside Drive had caught fire during a lodge fish fry in May of 1979. The fire gutted the building and caused $20,000 in damages. The lodge had already acquired the Central Avenue building from Mr. Gonzales and quickly remodeled and relocated.

The Loyal Order of Moose was a community service group that worked to serve children, seniors and those in need. It raised money in many ways, such as chili cook-off and car wash fundraisers. In 1982 the Moose raised $5,000 to purchase a custom electric wheelchair for Ricky Viveiros, a boy with cerebral palsy. In 1995 the Moose raised funds to aid the families of victims of the Oklahoma City bombing. The Chino lodge ceased to exist in 1996 and the building was sold to Frank and Faith Salvo, who had plans to convert it to a restaurant.

In 1997, Via Salvo Italian Restaurant opened there. The building had been remodeled with a kitchen, but the interior was mostly kept intact and the chapel was restored. Frank Salvo, who also owned Papa Paul’s Pizza on Mountain Avenue in Chino, had hoped to bring fine dining to town, and thought the chapel could be used for small weddings. Running two businesses became impossible, and eventually Via Salvo closed.

In 2007, the building was sold to Mike and Jennifer Towles for the purpose of relocating their restaurant, Guasti Café from Ontario because they were being forced to relocate due to redevelopment of the property. The Via Salvo building was quickly transformed and Guasti Homestyle Café opened in 2007. The Towles have been successfully operating their business in the old “castle” ever since. If you stop by the cafe ask Mike or Jennifer to show you the photo of Henry Gonzales that hangs on their wall. I'm sure they would be delighted that you know who he is.