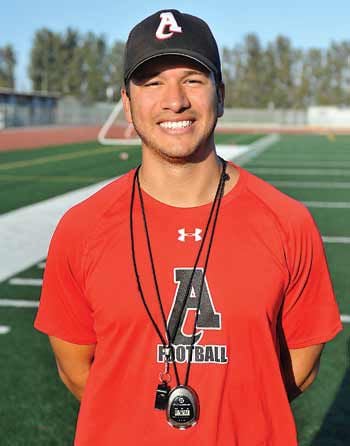 Ayala High first-year coach A.J. Gracia takes over a Bulldogs program that finished 3-8 overall a year ago and made the playoffs for the first time since 2008. 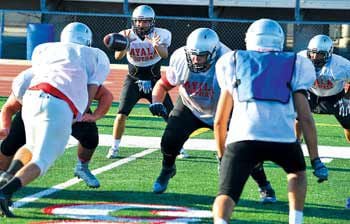 Ayala High first-year coach A.J. Gracia takes over a Bulldogs program that finished 3-8 overall a year ago and made the playoffs for the first time since 2008.

It can be argued the Ayala High School football team didn’t play to its potential during the 2015 season despite earning its first playoff berth since 2008.

The Bulldogs finished only 3-8 overall, including a 2-3 Palomares League season under fifth-year head coach Randy Reams.

But in 2016, a new head coach and a vamped up coaching staff will try to return the Bulldogs to prominence.

“We’ve got a good group of talented players. They are working hard and preparing themselves well for the season,” said head coach A.J. Gracia, who was hired in February as Bulldogs head coach. “There are some battles going on for starting positions.”

The 28-year-old was Chino High School’s quarterback during the 2005 season.

He’s going to have plenty of help running the Bulldogs program, having brought in several former head coaches, including his assistant head coach Matt McCain.

Coach McCain took over the Chino High School football program in 2010, a year after the Cowboys suffered through an 0-10 season. In his first season, Chino finished 10-0 and advanced to the second-round of the CIF-Southern Section playoffs.

Coach Gracia says a junior and a freshman are battling for the starting quarterback’s position, and both played well at passing tournaments this summer.

Junior James Linn played in four games last season as a backup to Michael Morales, completing 15 of 38 passes for 145 yards. He threw one interception.

Helping them on offense will be junior running back Max Hura, wide receiver Josh Pryor and offensive linemen Justin Salazar and Emmanuel Flowers.

Flowers, according to Coach Gracia, could be the Bulldogs’ best all-around athlete. He’ll also play cornerback on the defensive side of the ball.

Bulldogs’ captain Josh Elliott will be the key to the team’s defense. The middle linebacker is in his third season with Ayala.

Josh Zavosky is also back as a defensive end, fully recovered from a broken leg suffered in last year’s league game against Diamond Bar. Makaio Provoost will also make an impact as the Bulldogs’ outside linebacker.

“We’re very optimistic on our chances to win a league title with the players we have. They are very hard working and can’t wait for the season to get started,” Coach Gracia said.

“We’re getting thrown into the fire first game. It will be a good test for us,” Coach Gracia said.

The Bulldogs will round out their non-league schedule with games against Alta Loma, Diamond Ranch, Great Oak and Roosevelt before beginning league play Friday, Oct. 7 against Bonita.

“I’m not sure how this first year is going to play out, but I really like our chances to do well,” Coach Gracia said.