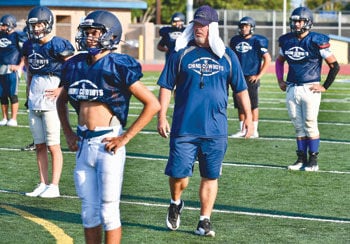 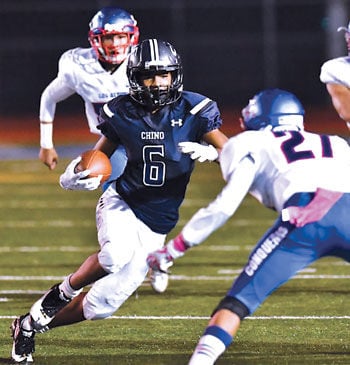 He hopes his enthuiasm can soak into the minds of his players as they enter the 2018 high school football season and get back the success Chino High School fans have been accustomed to for many decades.

“We’re bigger, stronger and faster than last year. That’s a plus. I think we are going to be somebody that you better not sleep on,” Coach Staricka said. “We only had two guys on offense and two guys on defense return last year. This year, we’ve got two guys back on offense and three on defense. We are working with a whole new group, and it’s not like we are reloading, we have to insert players in.”

Now, in the wide-open Mt. Baldy League, any of the six teams— Chino, Don Lugo, Ontario, Chaffey, Diamond Bar or Montclair— has a shot at winning this year’s league title with Mt. Baldy League powerhouse Colony High School moving to the Palomares League this season.

Coach Staricka said the team’s success will start with running back Derrin Henry, a senior who ran for 1,366 yards and 14 touchdowns as a junior in 2017.

He said this year’s offensive line is also bigger and much stronger than a year ago, and faster, but says inexperience players at the varsity level can be a negative.

“I’ll take experience over ‘some big, some strong and some fast’, but maybe we are the kind of team that is athletic enough to overcome that inexperience,” the coach said.

“I think the Mt. Baldy League has a lot of similar talent between all of the teams. I think it will be a much more competitive league for us to play in, versus having powerhouses like Charter Oak to deal with,” Coach Staricka said.

By moving back to the Mt. Baldy League, the annual Milk Can Game against city-rival Don Lugo High will become a league game once again.

Chino holds a 24-14 series lead, but Don Lugo has won the last two and three of the last four.

Coach Staricka said the game, scheduled for 7 p.m. Friday, Oct. 12 at Chino High, is the “eighth most important game on our schedule.”

“We don’t play them until our eighth game. We’re taking the season one game at a time,” Coach Staricka said. Chino kicks off its 2018 season at home Friday, Aug. 17 against Colton HIgh School. Kick off is 7 p.m.