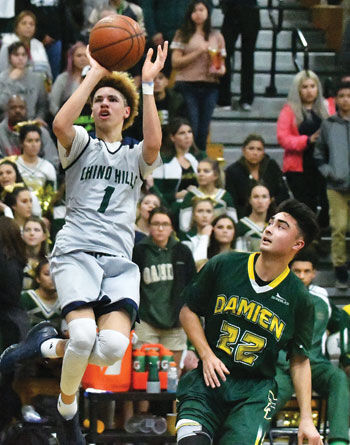 Former Chino Hills High basketball player LaMelo Ball could be selected in the top five of the 2020 NBA Draft, which is scheduled for 4 p.m. Wednesday, Nov. 18 live on ESPN. 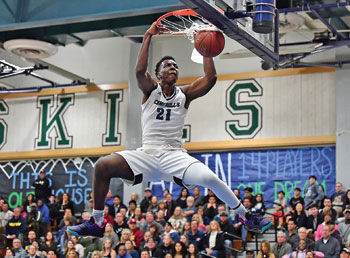 Former Chino Hills High basketball player Onyeka Okongwu could be selected in the top five of the 2020 NBA Draft, which is scheduled for 4 p.m. Wednesday, Nov. 18 live on ESPN.

Former Chino Hills High basketball player LaMelo Ball could be selected in the top five of the 2020 NBA Draft, which is scheduled for 4 p.m. Wednesday, Nov. 18 live on ESPN.

Former Chino Hills High basketball player Onyeka Okongwu could be selected in the top five of the 2020 NBA Draft, which is scheduled for 4 p.m. Wednesday, Nov. 18 live on ESPN.

There’s no question former Chino Hills High basketball standouts LaMelo Ball and Onyeka Okongwu will be selected in next week’s NBA Draft, but the only questions are at what spots they will be taken and by what team.

Ball and Okongwu, who were co-national Freshmen of the Year by Maxpreps.com during Chino Hills High’s national championship 35-0 season in 2015-16, could both be taken in the top five of the draft with Ball possibly first, second or third overall.

The NBA Draft is scheduled for 4 p.m. local time on Wednesday, Nov. 18 and will be televised live on ESPN.

When Ball and Okongwu are drafted, they will be become the third player of Chino Hills High’s 2015-16 championship team to be drafted by an NBA team.

LaMelo’s older brother, Lonzo Ball, was selected second overall by the Los Angeles Lakers in the 2017 draft after one season at UCLA.

Lonzo Ball played two seasons with the Lakers before being traded to the New Orleans Pelicans in the package deal that sent seven-time All-Star Anthony Davis to Los Angeles.

The Lakers won the 2020 NBA title in October in Orlando after a six-game victory against the Miami Heat in the NBA Finals.

Teams could possibly make trades prior to the draft that could alter the draft order.

LaMelo Ball finished with a 67-3 overall record in two seasons at Chino Hills High before departing the school in October 2017 just weeks prior to the start of his junior-year basketball season.

He, and his brother LiAngelo Ball, signed with Prienai in Lithuania and spent one season in the now-defunct Junior Basketball Association, which was created by his father, LaVar Ball.

LaMelo returned to high school for his senior year at Spire Academy in Geneva, Ohio and played the 2019-20 season with the Illawarra Hawks of the National Basketball League (NBL) in Australia.  He won NBL Rookie of the Year honors by averaging 17 points, 7.4 rebounds and 6.8 assists per game, playing an average of 31.2 minutes in each of his 12 games.

LiAngelo Ball, who was not selected during the 2018 NBA Draft, is now a member of the Oklahoma City Blue of the NBA G League.

Okongwu, a 6-foot-9 and 245-pound forward-center, added two CIF State boys’ basketball championships to his resume in 2018 and 2019, leading the Huskies to Division 1 championships and earning California’s Mr. Basketball honors both years. In four years at Chino Hills High, Okongwu’s teams finished a combined 117-24, which includes a 33-3 mark in postseason games.

The jersey number holds special meaning to Okongwu because his brother, Nnamdi Okongwu, wore the number as a member of the Chino Hills High basketball teams during the 2012-13 and 2013-14 seasons.

Nnamdi Okongwu tragically died a few days before his 18th birthday in July 2014 from a brain injury suffered in a skateboarding accident on Pipeline Avenue in Chino Hills. He had been offered, and accepted, a scholarship offer play basketball at Loyola Marymount University in Los Angeles.

“It meant the world to me to wear Nnamdi’s number. Every day I walked in here I see his picture on the wall. It felt so good to represent him by wearing his number,” Onyeka said during the jersey retirement ceremony held inside the Chino Hills High gym.

Okongwu played last season at the University of Southern California, starting in all 28 games he played and averaged 16.2 points, 8.6 rebounds and 2.7 blocks per game. He won Pac-12 Freshman of the Week honors twice during the 2019-20 season. He announced his intentions to leave USC to enter the NBA Draft on March 25 after the Pac-12 Conference and NCAA Men’s Basketball tournaments were cancelled because of the coronavirus pandemic.