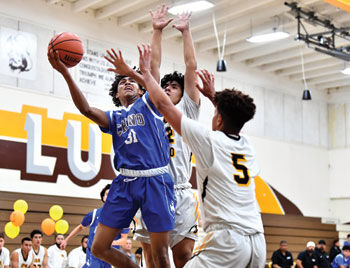 Chino High senior shooting guard Rudy Brown finds his way to the basket during the Cowboys’ 82-72 victory Thursday night to give the Cowboys (9-1 in league) the Mt. Baldy League boys’ basketball championship, their first league title since 1979. Jason Hillard led the Cowboys with 28 points. 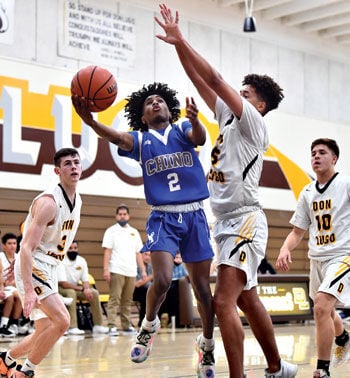 Chino High senior shooting guard Rudy Brown finds his way to the basket during the Cowboys’ 82-72 victory Thursday night to give the Cowboys (9-1 in league) the Mt. Baldy League boys’ basketball championship, their first league title since 1979. Jason Hillard led the Cowboys with 28 points.

When Chino High hired head coach Eric Cooper, a CIF-Southern Section championship coach several times while at La Verne Lutheran and Diamond Ranch high schools, in 2019 as their boys’ basketball coach they hoped he’d turn around a program without much success in decades.

The Cowboys won nine straight games, including Thursday night’s 82-72 win over Don Lugo High, to capture the Mt. Baldy League championship, their first league title in the sport since 1979.

Jason Hillard, a 6-foot-6 sophomore, led the Cowboys with 28 points, including 18 in the first half when the Cowboys led Don Lugo by nine at the break. Andrew Palacios, a transfer from Don Lugo, connected on five 3-pointers and finished with 20 points and Aaron Harris added 15 points for Chino, which finished its regular season at 9-1. The CIF-Southern Section playoff brackets will be announced Sunday with first-round games set for Wednesday.