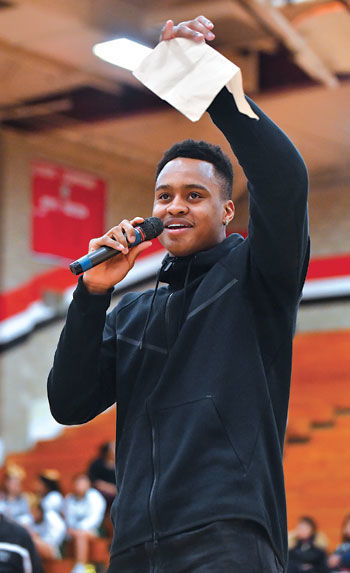 Edgar Jr. acknowledges the crowd during a speech following the retirement of his Ayala jersey number. 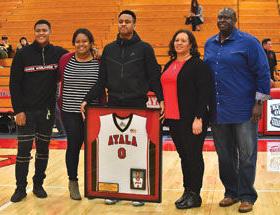 Ayala High graduate John Edgar Jr. holds his framed retired jersey standing with his parents John and Elisa and siblings Caleb and Bria during a Jan. 26 ceremony to retire his #0. 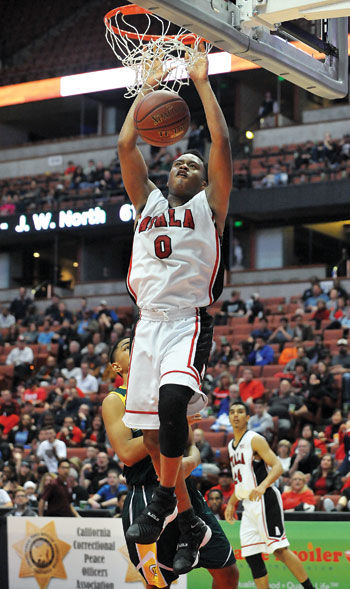 Edgar Jr. acknowledges the crowd during a speech following the retirement of his Ayala jersey number.

Ayala High graduate John Edgar Jr. holds his framed retired jersey standing with his parents John and Elisa and siblings Caleb and Bria during a Jan. 26 ceremony to retire his #0.

John Edgar Jr., a 2016 Ayala High School graduate and CIF-Southern Section Division 2AA Player of the Year, will be the last Ayala player to wear the number after a retirement ceremony Jan. 26 inside the Bulldogs gym.

Flanked by his parents John and Elisa and siblings Caleb and Bria, Edgar Jr. was presented with a framed Ayala High basketball jersey with #0 that will hang inside the Ayala High gym.

“I’m just blessed to be selected as someone to have their jersey retired. I couldn’t have done it without my teammates. We had a really good bond. We were all committed to each other,” said Edgar Jr., a sophomore men’s basketball player at UC Irvine.

“He deserves it,” Coach Mounce said. “When he came to Ayala we saw how much potential he had. He was committed to working hard and putting all the time and effort to great player. He could do it all on the court. John knows he couldn’t have done what he did without all his teammates.”

Edgar Jr. led the Ayala High boys’ basketball team to its first CIF-Southern Section championship on March 3, 2016 after the Bulldogs defeated Edison High of Huntington Beach, 63-49, at the Honda Center in Anaheim.

The victory came about 2 1/2 hours after the Chino Hills High won its first CIF-Southern Section title in boys basketball. Edgar Jr. transferred from Chino Hills High to Ayala prior to his sophomore season.

Because of eligibility rules, Edgar Jr. had to sit out his sophomore season and the first half of his junior season before he was able to suit up for the Bulldogs.

During his senior season, Edgar Jr. averaged 23 points and 10 rebounds a game and was named co-Most Valuable Player in the Palomares League. He had a season-high of 41 points.

The 6-foot-6 forward was also the Division 2 John Wooden, a first team All-State selection, and led the Bulldogs to their first CIF State title appearance in Sacramento.

That season’s 34 victories was a school record, smashing the previous record of 27 wins set by the 2000 team, which also advanced as far as the CIF-Southern Section championship game.

“This team was real special. We always had each others backs on the court,” Edgar Jr. said.