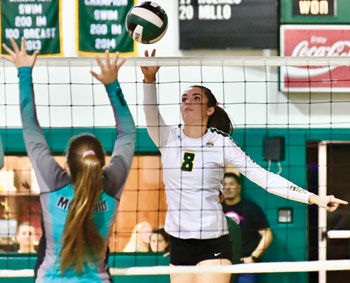 Ontario Christian’s Annaka Jorgenson records one of her game-high 15 kills Thursday night in the Knights’ three-set win over Sultana in a Division 5 girls’ volleyball first-round game. 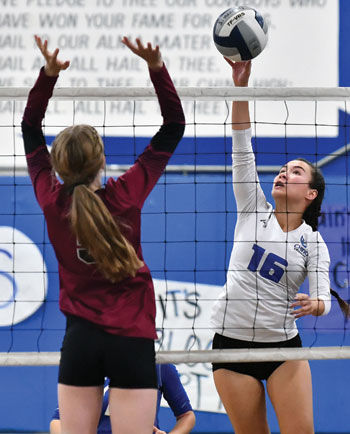 Ontario Christian’s Annaka Jorgenson records one of her game-high 15 kills Thursday night in the Knights’ three-set win over Sultana in a Division 5 girls’ volleyball first-round game.

The Don Lugo and Ontario Christian high school volleyball teams will compete tonight (Oct. 20) in the second-round of the CIF-Southern Section playoffs after their first-round victories Thursday night.

The Conquistadores (13-7) will host Sacred Heart-Los Angeles at 6 p.m. tonight.

General admission tickets for tonight’s games are $10, $5 for high school students and children.

Chino wrapped its season Tuesday night with a four-set loss to Patriot High of Riverside in a Division 6 wild-card game at the Chino High gym. The Cowgirls finished the Mt. Baldy League season as the third-place team.

All CIF-Southern Section girls volleyball brackets can be found at cifss.org.