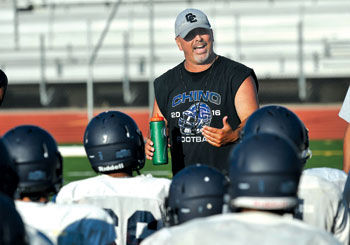 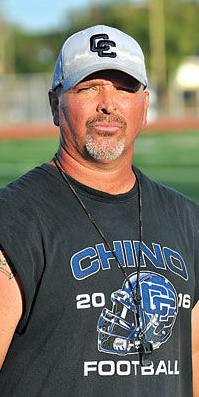 Hearing the excitement come out of the voice of first-year Chino High head coach Damien Staricka is having a positive effect on the Cowboys football team.

Players who quit playing football at Chino High two years ago are now coming back in droves, and Coach Staricka can’t be happier.

More than sixty players are on this year’s varsity squad, compared to less than 35 who were on the team for the Cowboys’ final game of the 2016 season.

He got a late start to his offseason program after getting hired in late May, following the resignation of two-year coach Jesse Ceniceros, who  became the head coach at El Monte.

Others who haven’t played high school football before are also coming out this year, including quarterback Mike Granados.

“I come from an athletic family. I’ve been a baseball player, but decided to come out for football and have fun,” said Granados, whose brothers Jon and Colin played football at Chino High in the past five years.

Coach Staricka said this year’s Cowboys’ team is not very fast, but is working his players to be physically sound and tough. “Practices are uptempo and get a lot done in a short amount of time. The players are enthusiatic about the start of the season,” he said.

He said the Cowboys’ offense will consist of a balance of passing and running, different from the run-heavy, double-wing offense the team was instilled with the past two years. “We hope to spread the field a little bit. We’ve got a guy who can throw the ball, and we’ve got three guys that can run it. If the offensive line can open the holes, then we should be OK,” Coach Staricka said.  Chino will open the season at 7 p.m. Friday, Aug. 25, at home against Damien.

“We’re projected by internet sites to go 1-9, but we are going to be a better football team than that,” Coach Staricka said.