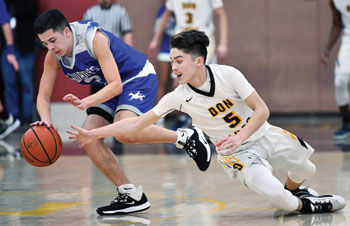 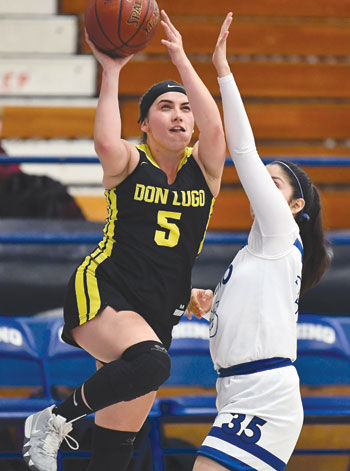 The Bulldogs won their first league game of the season Tuesday night with a 13-point win over Alta Loma (0-5 in league).

Diamond Bar finished off the first half of the Mt. Baldy League season with a 5-0 record, pulling out a five-point win over Don Lugo (3-2 in league) on Tuesday.

Chino’s Syruss Galindo led the Cowboys in scoring with 18 points. Andrew Archiniega scored 11 points and Elijah Fitch had 10 points for the Cowboys.

Don Lugo’s Reanne Reola had 19 points, Krystle Medrano had 13 points and Jailah Lee scored 10 points Tuesday in the Conquistadores’ (5-0 in league) win over Diamond Bar. The Conquistadores held Diamond Bar to one point in the second quarter and shut out the Brahmas in the fourth quarter.

Bonita led 33-15 at halftime of its win Jan. 17 over Ayala. Emma Lazaro scored a team-high 16 points and Ariana Gonzalez added 13 points for Ayala.

Chloe Briggs scored 22 points and had 10 rebounds and Maddy Martinez had 18 points, including six 3-pointers, to lead the Knights to a victory Jan. 17 over Woodcrest Christian.

Chino freshman Malani Johnson scored 14 points on 7 of 11 shooting and Emma Seifert added 10 points in the Cowgirls’ win last Saturday over the Vikings.

Montclair’s Ronaldo Ibarra scored on an assist from Javier Gutierrez in the second half of the Cavaliers’ win over the Cowboys Tuesday.

Claremont broke a 0-0 halftime tie with two second half goals, giving Ayala its first league loss in six games this season. With the loss, Ayala fell to 11-2-2 overall, 4-1-1 in league.

With Tuesday’s win over Etiwanda, Chino Hills High improved its overall record to 7-2-3 and league record to 3-1-1.

Ontario Christian’s Isaac Cortez scored the game’s only goal in the first half to give the Knights a victory over the Lions.

Chino’s Grace Sanchez, Alexia Garcia and Amina Nava each found the net in the Cowgirls’ win Tuesday against Montclair.

Diamond Bar’s Marisa Vasquez scored three goals and Alexis Fuller and Emily Le each had a goal Tuesday in the Brahmas’ victory over Don Lugo.

Natalie Turiace and Katy Davis each recorded an assist for Claremont.

Linfield Christian’s Dani Williams and Ryley Burns each scored a goal Tuesday to lift the Lions past Ontario Christian in league play.