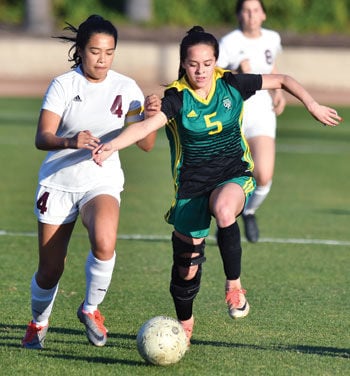 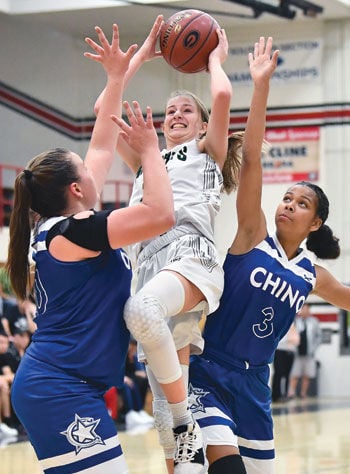 The Knights finished the Ambassador League season at 14-0 with Thursday’s 52-point win over Loma Linda Academy.

Freshman Chloe Briggs scored 45 points and had nine rebounds and six steals to lead the Knights past the Falcons Tuesday to improved to 24-2 overall, 13-0 in league.

Ontario Christian’s Chloe Briggs scored a game-high 38 points and Taryn Mouw added 16 points Jan. 31 in the Knights’ win over the Fighting Lancers. The Knights led 22-5 after one quarter and 34-15 at halftime.

The Bulldogs outscored Colony 50-36 in the second half to earn a league win Jan. 30 against Colony.

La Salle outscored Ayala 12-10 in the first quarter, 13-11 in the second quarter, 13-12 in the third quarter and 12-11 in the fourth quarter to pull out a six-point win over Ayala last Saturday at the Glendora Shootout at Glendora High School.

Don Lugo senior Krystle Medrano hit four 3-pointers and finished with 14 points and Jailah Lee added 10 points and seven rebounds in the Conquistadores’ loss to Burroughs at the Glendora Shootout.

Don Lugo outscored Chino 17-7 in overtime Tuesday to pull out a league win at the Chino High gym.

Bonita led the Bulldogs 26-2 after one quarter and went onto to a 23-point win Tuesday.

The Huskies were held to eight first-half points and outscored the Grizzlies 28-17 in the second half but fell short Jan. 31 in its league game played at the Chino Hills High gym.

Ontario Christian outscored Aquinas 18-14 in the fourth quarter Tuesday to earn a league win over the Falcons. Lee Bruinsma scored 22 points and 10 of 13 shooting and Nolan Jorgenson and Ryan Freymond scored 10 points apiece for Ontario Christian.

Lee Bruinsma scored 20 points and had 14 rebounds. Ryan Freymond chipped in with 14 points and Ricky Freymond scored eight points and pulled down 16 rebounds to lead Ontario Christian past Western Christian on Jan. 31.

The Bulldogs broke a scoreless tie with an overtime free kick goal by Alex Anido Jan. 31 to shutout the Bearcats in league play.

Chino erased a 2-0 halftime deficit with goals by Martin Arellanos and Andrew Diaz Thursday in their tie against Montclair. Montclair won the league title with a 7-1-2 record and Chino finished second at 6-1-3.

Chino’s Pedro Estrada and Nathan Barton each had a goal and Adrian-Antonio Lopez recorded two assists in the Cowboys’ tie with Don Lugo Tuesday.

Ontario Christian’s Evan Sadler scored two goals in the first half and recorded the hat trick with his third goal of the game in the second half Tuesday as the Knights and Falcons tied in league play.

Evan Sadler and had a goal and an assist and Micah Beldon scored a goal Jan. 31 in the Knights’ shutout win over Western Christian.

Don Lugo led 2-0 at halftime in Tuesday’s win over Chino.

Don Lugo led 8-1 after one quarter and 11-1 at halftime in Tuesday’s win over Chino.