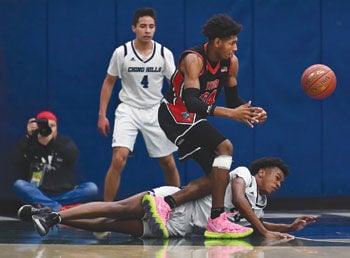 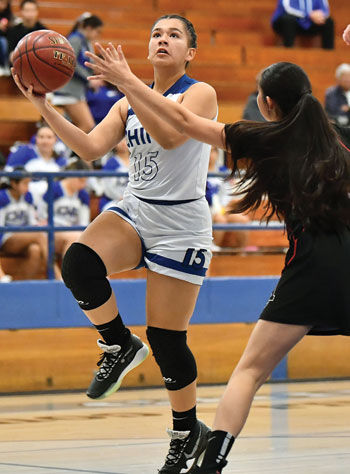 Chino High’s Noelia Silva (#15) scores on a layup in the Cowgirls’ 78-41 victory Dec. 20 over Ayala in a nonleague girls’ basketball game at Chino High’s gym. Wendy Hernandez scored 13 points for Chino, which had four players scoring in double figures in the victory.

Chino High’s Noelia Silva (#15) scores on a layup in the Cowgirls’ 78-41 victory Dec. 20 over Ayala in a nonleague girls’ basketball game at Chino High’s gym. Wendy Hernandez scored 13 points for Chino, which had four players scoring in double figures in the victory.

The Conquistadores improved to 7-6 with a two-point win Dec. 20 over Jurupa Hills.

Chino Hills’ Marques Fountain had a team-high 11 points and Ashton Franklin and Ernesto Casarez scored 10 points apiece for Chino Hills (8-2) in the loss.

Four Chino High players scored in double figures Dec. 20 in the Cowgirls’ victory over the Bulldogs. Wendy Hernandez led the way with 13 points, Kimberly Day added 12 points and Valeia Payne and Malani Johnson scored 11 points apiece for Chino, which is ranked sixth in the CIF-Southern Section Division 3A poll.

Ayala improved to 7-1-1 overall, 1-0 in league with its Dec. 19 league-opening victory over Claremont. Claremont led 3-1 at halftime.

Claremont’s Avery Gonzalez and Emily Maass each had a goal Dec. 20 in the Wolfpack’s victory over Ayala to start the Palomares League season.