Chino’s Isaiah Naranjo avoids the tag on a stolen base attempt last Saturday during the Cowboys’ season-opening 2-0 win over Valley View at the Chino High stadium. The teams split a double header with Valley View winning Game 2, 10-7. 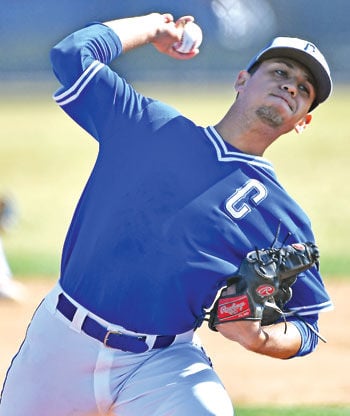 Chino’s Isaiah Naranjo avoids the tag on a stolen base attempt last Saturday during the Cowboys’ season-opening 2-0 win over Valley View at the Chino High stadium. The teams split a double header with Valley View winning Game 2, 10-7.

Six Chino Valley wrestlers qualified for the CIF-Southern Section Masters Meet after earning qualifying spots at the division championships last week. The Masters Meet, which is being held at Sonora High in La Habra, began Friday and concludes today.

The state meet for boys and girls is scheduled for Feb. 27-29 at Rabobank Arena in Bakersfield.

Ganesha scored three first-half goals Tuesday in its quarterfinal win over the Knights, who finish their season at 16-2-3. Ganesha improved to 21-2-1 with the win.

Chino improved to 2-1 this season with Tuesday’s win over Vista Del Lago in the opening game of its Chino Brian Hamilton Memorial Tournament. Vista Del Lago committed four errors in the loss.

Kaiser’s Ignacio Alvarez singled, doubled, homered and finished with three RBIs Tuesday to lead the Cats past Ontario Christian in the team’s opening game of the Chino Tournament. Nomar Caudillo had two hits and two RBIs and Fernando Duran and Christopher Perez each knocked in a run for Kaiser.

Don Lugo’s David Vizcaino had a single, triple and three RBIs and Connor Burns, Johnnie Valdez and Sean Boskovich each knocked in a run Tuesday in the Conquistadores’ win over the Eagles.

Chino Hills High opened its season Tuesday with a four-run victory over Mayfair in its opening game of the annual Don Lugo High Preseason Tournament.

Ayala scored five unanswered runs, including the game-winner in the bottom of the ninth inning, in its win last Saturday over Esperanza. Jacob Badawi finished 3 for 4 with two RBIs for Ayala.

Chino’s Isaac Ruiz went 3 for 4 with an RBI and Aaron Luna and Arthur Briones had two hits apiece last Saturday in the Cowboys’ loss to Valley View.

Sergio Galindo and Isaac Ruiz each knocked in a run and pitcher Ulises Perez tossed a complete-game, three-hitter last Saturday for Chino in its season-opening game against Valley View last Saturday.

Don Lugo’s Connor Burns hit a grand slam, David Vizcaino had two hits and Mario Barragan walked with the bases loaded to bring in a run last Saturday in the Conquistadores’ win. Vizcaino also threw six innings, struck out eight and allowed four hits and two walks in the victory.

El Dorado scored four of its five runs last Saturday in the second inning in its win over Don Lugo. Connor Burns homered and Mario Barragan had two hits for Don Lugo.

Don Lugo swept a doubleheader from El Rancho last Saturday to open its 2020 season with a pair of victories.

Ayala’s Tatiana Garcia had a double and two RBIs and Kobie Hura and Kayla Rodgers each brought home a run Wednesday in the Bulldogs’ win over Punahoua High of Hawaii.

The Bulldogs led 3-0 after one inning and 5-0 at the end of the second.

Marissa Hassis and Cassandra Roman had two hits apiece for Ayala. Paige Cowley had a single, home run and three RBIs for Upland.

The Bulldogs finished with 15 hits and scored six of their runs in the third inning Monday in their win against Montclair.

Tatiana Garcia finished with two hits, including a home run, and five RBIs and Kobie Hura and Kayla Rodgers knocked in three runs apiece for Ayala. Rodgers and Lauryn LeMaster each had a home run in the win.